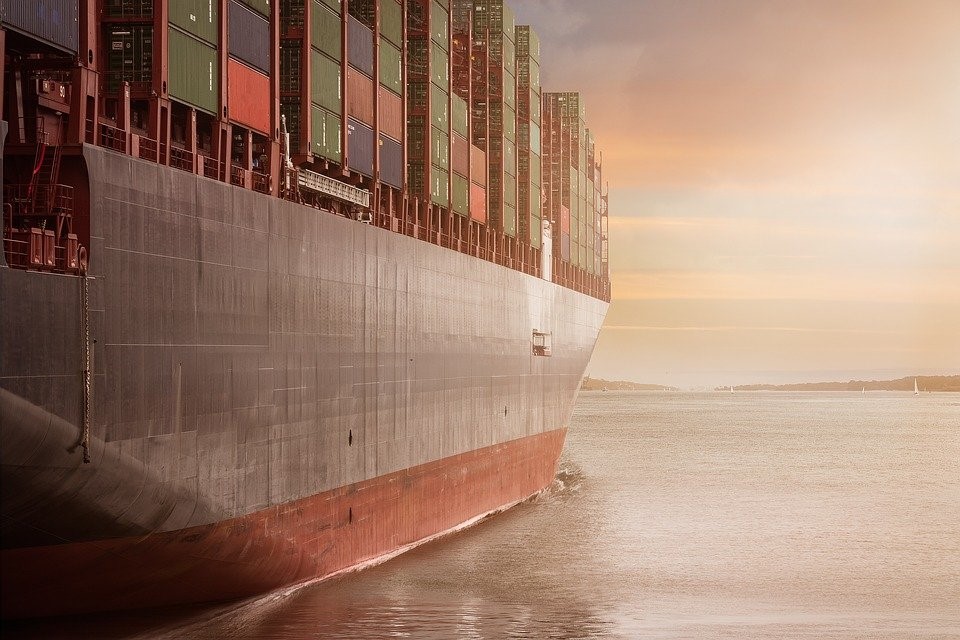 Blockchain is a disruptive technology – but not in the usual sense. From recording contracts and transactions to logging assets and identities, there’s no doubt that many blockchain use cases are a sea change from traditional business methods, but rather than entirely redirecting commercial activities it instead provides the tools to improve them. The corporate world knows this, and that’s why it’s expected that corporations will spend $20 billion per year[i] for blockchain technical services by 2024.

There are arguably few areas of business that could benefit more from innovation than international trade. As the Brexit process has taught many entities both in the UK and abroad, cross-border trade is no easy undertaking, presenting unique challenges to businesses and the authorities alike. For one thing, cross-border trade is still an extremely paper-intensive exercise. Any one trade arrangement is likely to involve documents concerning financing, customs clearance, and logistics at minimum. This means that international trade is riddled with numerous checkpoints, at which different people from various organisations handle paperwork using distinct systems. In turn, this amplifies the risk of a clerical error being made, whilst also making it easier for bad actors to engage in fraudulent activities.

All things considered, engaging in international trade is a complex and often expensive endeavour. With these issues in mind, eminent bodies such as the World Trade Organisation (WTO)[ii] and the European Parliament[iii] are now considering how blockchain technology could be utilised to bring about positive change within the field of international trade.

In this article, we consider the potential of blockchain technology to influence and improve international trade practices whilst examining some of the barriers to its use.

Blockchain is perhaps best known as the technology that underpins Bitcoin and other cryptocurrencies, but there is so much more to it than that. In essence, a blockchain is a decentralized, record of transactions that is distributed across multiple devices (known as ‘nodes’) on a peer-to-peer network. Making use of cryptography, transactions are verified by other computers on the network and records are permanently stored and without the risk of alteration by any single party. All of this is why blockchain has been described by The Economist as a “trust machine”.[iv] It provides a high degree of transparency and allows otherwise unconnected parties to conduct business with confidence.

Admittedly this is a somewhat simplified explanation of blockchain, but it shows just how much potential it has. With this technology, a world in which contracts are stored in transparent and tamper-proof databases really is within reach, and that could bring about remarkable change for businesses involved in cross-border trade.

How blockchain could make a difference in international trade

The scope for the use of blockchain technology in international trade is clear. According to the WTO’s Emmanuelle Ganne, blockchain “ensures immediate, across-the-board transparency”, allowing parties to trace relevant products and transactions whilst benefiting from a single, reliable trading record. On a practical level, this could bring about change in a number of key areas.

Perhaps the most obvious benefit of introducing blockchain technology into the international trade sphere is the possibility of quicker and simpler international transactions. With or without an understanding of blockchain, most people have heard of cryptocurrencies and might even have a grasp on how they work.

Digital currencies facilitate real-time payments, without the need for the involvement of intermediaries such as banks. Crucially, properly conducted cryptocurrency transactions are safe and secure – making them highly attractive in the fraud-ridden world of international business. With major banks such as J.P Morgan and the Swiss state-run Basler Kantonalbank offering cryptocurrency services of their own, there is clearly a belief in the viability of blockchain-based currencies over traditional money and that could spell positive change for cross-border transactions.

Although the lion’s share of blockchain investment has been piled into the development of cryptocurrencies, noteworthy efforts have been made in the field of supply chain verification – which anybody involved in cross-border trade, will know to be a serious challenge that is only made worse by the paperwork-intensive processes that are currently used. With off-the-shelf and bespoke solutions available, it’s now possible for wholesalers, producers, suppliers, and end buyers across the entire acquisition chain to verify precisely where, when and how components and ingredients were produced and moved.

In a world where consumers and executives assign value to traceability, blockchain presents the answer to a very difficult question – that of tracking vast quantities of goods across the entire globe. With businesses now able to trace the origins of the products they buy and sell, they can also keep tabs on pricing throughout the supply chain and work to improve operational efficiency all without the need for copious amounts of paperwork and the potential mistakes that go with it.

A good example of this can be found by looking to the global coffee giant, Starbucks.[v]From Summer 2020, the chain implemented a blockchain-based system which allows buyers, and even U.S. customers to find out the origins of the beans in their drink or bag of coffee. A reverse code will also be issued to farmers, enabling them to track and trace their produce. This goes to show that with the right resources, blockchain could provide a feasible route to improved supply chain management within international trade.

The protection and transfer of intellectual property (IP) rights is a key priority for many businesses operating on an international level. From digital hardware to pharmaceutical products and fashion items, the effective protection of IP rights is often very difficult despite a relatively unified legislative framework under the WTO Agreement on Trade-Related Aspects of Intellectual Property Rights (TRIPS) and the various treaties administered by the World Intellectual Property Organisation (WIPO).

Difficulties in this area frequently arise at the enforcement level, where brands and IP rights-holders often struggle to effectively communicate with the authorities. In the EU, for instance, rights holders seeking the seizure of counterfeit goods may be faced with a race against time to file the necessary paperwork with customs authorities unless they have already committed considerable resources to obtaining an Application for Action under Regulation (EU) No 608/2013.[vi]

This issue, along with numerous others, could be solved at least in part by the application of blockchain-based solutions within international trade. By using blockchain to track registered and unregistered IP rights, customs authorities and other entities will be better placed to identify whether goods in transit are legitimate or illicit. With a simple means to establish proof of creation and ownership, the authorities may no longer be burdened with the task of identifying and contacting rights- holders whilst those attempting to assert or protect their rights will have a clear means of doing so.

Barriers to the use of blockchain in international trade

Whilst there are clear use cases for blockchain in the field of international trade, there are also significant challenges that must be overcome before it can be described as a practical solution. For one thing, Ganne’s work recognises that for blockchain solutions to work to their full potential, it would be necessary for all aspects of cross-border trade to be digitalised. To achieve this, a substantial spending commitment would be needed on both a commercial and governmental level. In addition to this, it is also worth remembering that many jurisdictions are limited to the use of trading infrastructure that is far less sophisticated than that found in the UK, meaning that there are gaps to be bridged before a uniform blockchain-based solution can be implemented.

Beyond this, blockchain solutions must cross some serious regulatory hurdles before they can be considered stable enough to be rolled out across international supply chains. Although blockchain is often heralded as a solution that will overhaul entire industries, it’s also the case that the technology is in its early stages and remains subject to intense scrutiny. Perhaps more crucially, there is not yet a recognised framework that defines the legal nature of blockchains and shared distributed ledgers. This makes it incredibly difficult to establish jurisdiction and applicable law in the case of any disputes, whilst also raising questions in respect of liability since in many cases there won’t be a single party responsible for the functioning of a distributed ledger. Issues also arise in the form of conflicts with existing legislation, for instance the so-called ‘right to be forgotten’ under the European General Data Protection Regulation (GDPR). As blockchain records are permanent and ‘tamper-proof’, it may be quite impractical to delete the data of any given European citizen at their request.

The future for blockchain and international trade

Only time will tell how the legal environment evolves around blockchain, but unless efforts to establish a framework for its use are coordinated, we may instead see a patchwork of regulations that do little to ease the existing pain points of international trade. This issue has already been seen with cryptocurrencies, where progressive regulations in countries such as Japan and Switzerland have been countered by extremely restrictive rules in India and elsewhere. All of these issues provide a platform for the legitimate concerns of critics who argue that blockchain cannot simply be overlaid onto existing commercial infrastructure, and there is certainly more work to be done before such fears can be allayed (whether through regulatory sandboxes in which ideas and proposals can be tested, or other means).

In summary, blockchain technology has the potential to significantly improve the way we conduct trade on an international level, but it doesn’t come without its challenges. As an emerging field, it can be difficult not only to implement blockchain solutions but also to predict how future regulatory developments might influence the use of the technology. With these points in mind, expert advice could help your business and its clients to better navigate the complexities of blockchain.

To learn more about how blockchain could assist your business, contact our specialist team by emailing info@blockchainlegalconsultancy.co.uk.

[iv]Werbach, K. The promise of the blockchain – The trust machine. The Economist, 2015.

[v]Almeida, I. Starbucks Clients Can Now Trace Their Coffee, And So Can Farmers. Bloomberg, August 2020.

COVID-19 – help or hindrance to the case for digital currencies?